Polish Pierogis with Cheddar and Potatoes (plus extra bacon!)

Impress your friends when they come over with these made-from-scratch Cheddar and Potatoes Pierogis! Besides, this special doesn’t require a long list of fancy ingredients, so it’s perfect when you feel like you don’t want to leave the house to go grocery shopping. Now, the Polish culinary experts say that the secret to ideal pierogis lies as much in the filling as in the dough. The dough should be flexible, smooth and soft, and the good part is, you only need three simple ingredients to make it! There’s no time to lose, head to the kitchen and roll up your sleeves! Before you know it, homemade pierogis will be ready to eat on your plate 🙂 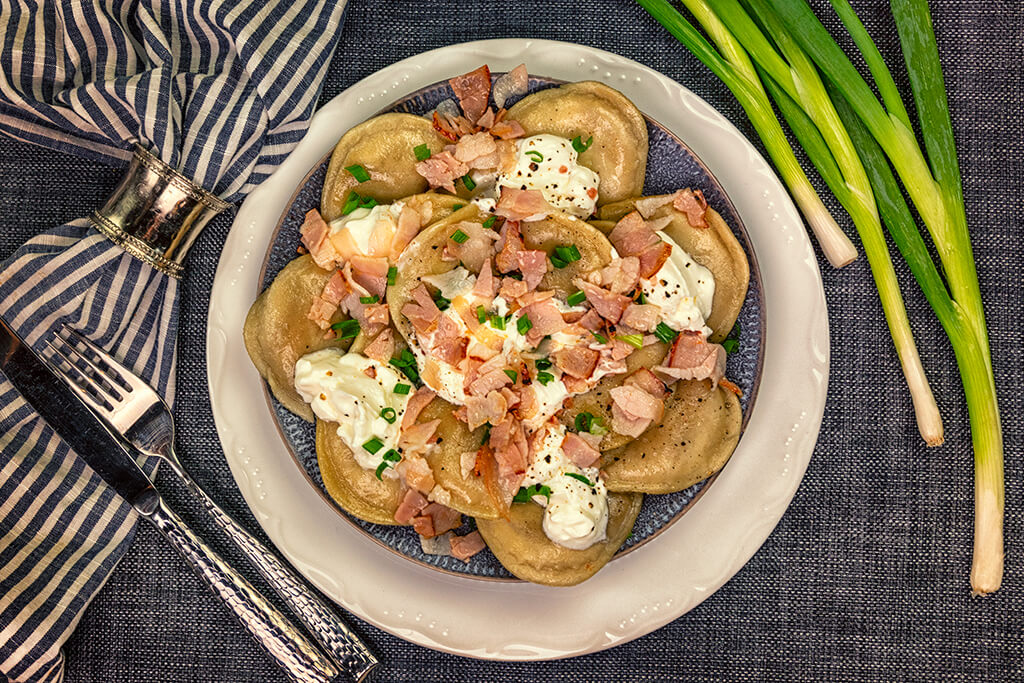 In the meantime, prepare the dough. Combine the flour with salt in a large bowl. Slowly add warm water and start gently mixing the ingredients. Once you’ve poured all the water, start kneading the dough until it becomes soft and smooth. For the best results, use your hands, but you can also use a wooden spoon.

Sprinkle some flour on the sides of the dough so that it doesn’t stick out to the table. Put aside.

Strain the potatoes and mash them. Chop the onion and fry it with salt over the medium-heated pan using lard or any cooking oil. Add to the potatoes and set aside for 15 minutes to cool down. Next add the cheddar cheese, salt, and pepper, and mix all the ingredients well together.

Sprinkle some flour on the tabletop. You can divide the dough into two parts to facilitate the rolling. Roll the dough until it becomes 1/8 inch thick (3mm)

Place the tablespoon of filling in the middle of each round. You can add warm water on one edge of the pierogi to seal them better. Then, fold over half of the dough and gently press both edges together. Make sure to close the pierogis well so that no filling leaks out while boiling. You can also use the fork and create a nice pattern.

Bring water to a boil in a large pot. Salt it and gently place the pierogis in the water. Don’t put too many at once, we don’t want them to stick together. Boil the pierogis until they start to float (which is approx. 2 minutes)

Take out the pierogis with a slotted spoon and place them on the plate to slightly cool down. Fry the bacon on the pan and cut the green onions.

Put a tablespoon of sour cream on top of the pierogis. Sprinkle bacon and green onions. You can add salt and pepper to taste. CONGRATULATIONS! You’ve just made Polish Pierogis with Cheddar and Potatoes!

Can I have seconds? 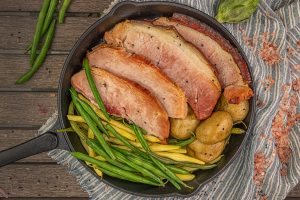 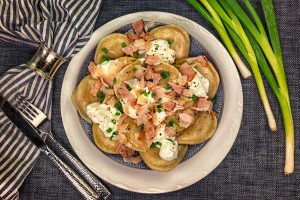 Polish Pierogis with Cheddar and Potatoes (plus extra bacon!) 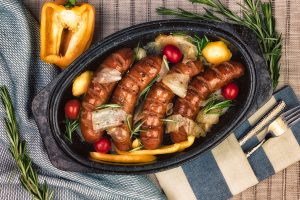 Uniqpol Incorporated is proud manufacturer of deliciously healthy European style deli. For over 23 years, we've been brining flavor and taste to the Canadian tables all over Ontario.